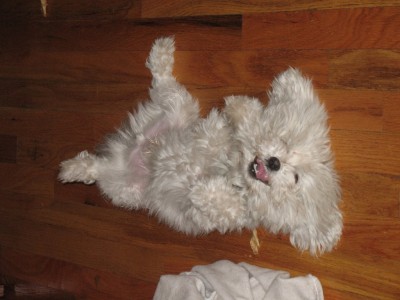 This winter I fostered a dog for the Metropolitan Maltese Rescue. I was told he had been an owner surrender because his owner’s fiance didn’t care for the dog and therefore he spent 19 hours a day in his crate. Needless to say, the little guy had “issues.” His name was Bogart, but everyone agreed it didn’t suit him so I promptly changed it to Henry. I chose Henry after Henry Young, a prisoner at Alcatraz that spent 3 years in solitary confinement (he was played by Kevin Bacon in “Murder In The First”).

Henry had to go to another foster home when we moved in February, but I’m told he’s doing very well there. Apparently, he has tons of Chihuahuas to play with and loves being part of that pack. He is still available for adoption, though he would only be suitable for an experienced and child free home. If anyone is interested in adopting Henry, feel free to contact me for information on his “issues.”

All of his information can be found on Petfinder. The photo here is of him (before being groomed) enjoying a strip of dried chicken.

END_OF_DOCUMENT_TOKEN_TO_BE_REPLACED

Very enjoyable experience, helped us feel we were on the right track. It was good to go over everything we are doing with someone, and voice struggles we have with behavior. We also enjoyed learning from Lizzie and her pet, by seeing tricks, and also having her watch us with our dog. We also have to note that it was amazing to be able to set up an appointment so easily, and meet with someone so quickly online — this was an excellent feature, thank you!

Amanda is amazing! I emailed her before signing up for the class because Winnie is leash reactive. Amanda suggested we sit near the back or front door so we have a quick exit if Winnie needed a break and she did a great job making sure other owners kept their dog out of our space (and always gave them a friendly reminder when they wandered over near us). Her instructions were clear, she was funny, had high energy and made the class really enjoyable for all of us. She was somehow able to cater to… END_OF_DOCUMENT_TOKEN_TO_BE_REPLACED