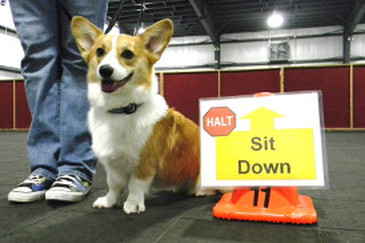 The Doggie Academy trainers have committed to competing in their first Rally Obedience trial at the end of October and will be posting about the experience in our new blog series #RoadtoRally.

You may be asking yourself, “Rally Obedience?! What is that?” Rally Obedience, or Rally-O as it is called by enthusiasts, combines aspects of traditional obedience with a bit of dog agility to create a fun new dog sport. Rally-O’s rules are far less strict than those of traditional competition obedience and fun for everyone from pet dog owners to experienced obedience and agility dog handlers. Rally-O seems to be the canine sport that does not discriminate, where you will see a young, four-pound Chihuahua competing in the same ring as the thirteen-year-old, sixty-pound mutt.

Follow along with Sarah and her eight-year-old Labrador Hank, Kate and her thirteen-year-old Chihuahua mix Batman, and Amanda and her three-year-old Bichon Frise Lucy as they each prepare for the looming October 22nd Rally-O trial. With our #RoadtoRally series you can see the challenges each team faces, how they go about overcoming them, and you can follow along straight through to the day of the trial and, who knows, maybe even beyond. Join us for the ride on the #RoadtoRally!

Next up, see how each trainer is approaching the trial and what her goals are.